Putting on a contest, giveaway, or sweepstakes in Canada requires that you comply with all the promotional contest rules that govern this kind of activity. Failure to comply with these rules can lead to significant penalties that include large fines levied against you or your company by the Canadian government.

You should consider several pieces of legislation and sources of law. Continue reading to learn what those sources are and where you can find them.

Don't forget these rules of thumb: 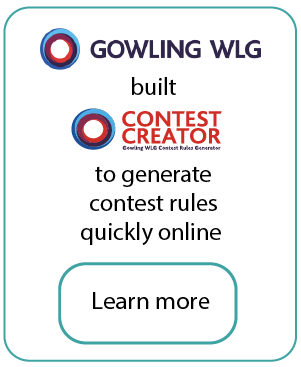 Every contest needs rules, and we'll begin with a checklist of the ones you'll need to include in your long-form rules.

The image below is a checklist for promotional contest rules in Canada: 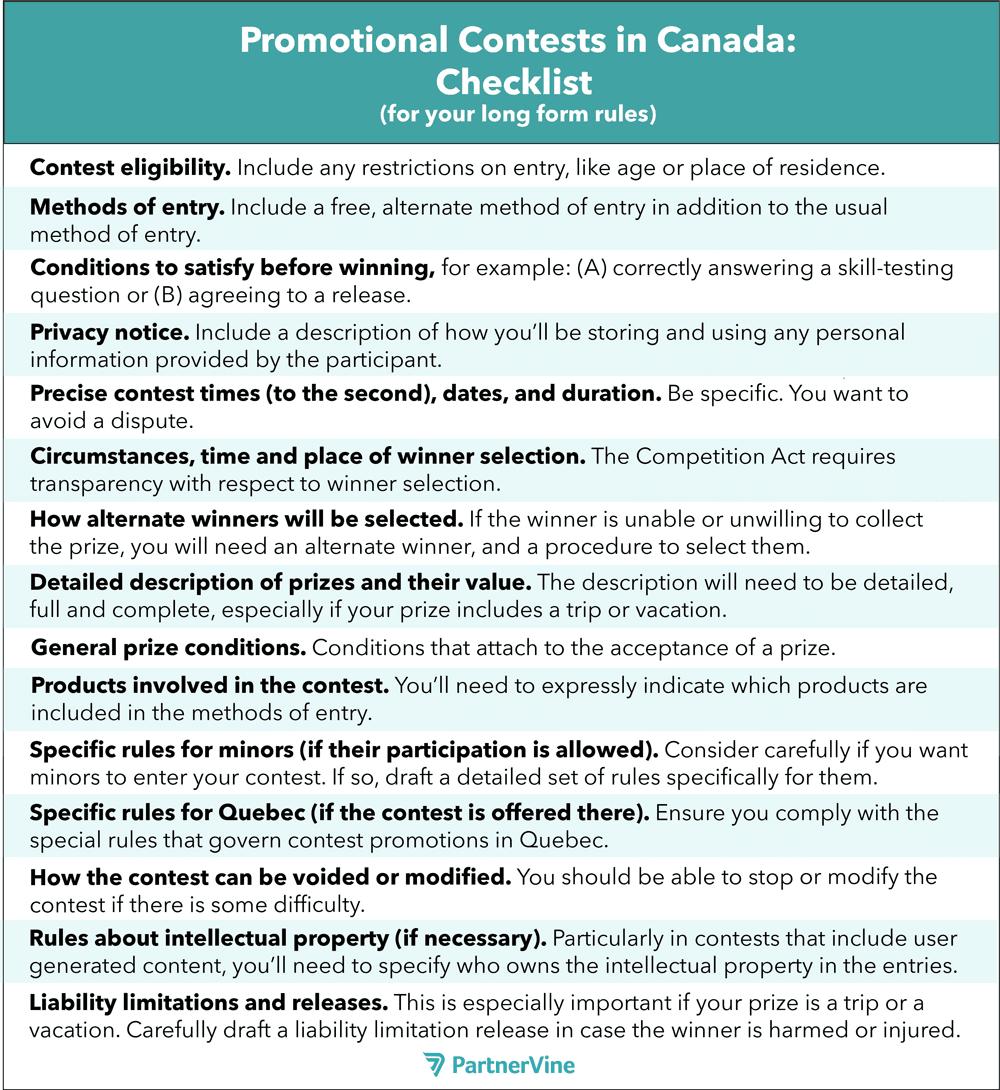 You’ll also need “Mini-Rules” to attach to every mention of your promotional material and advertising. The specific details that must be disclosed in the mini-rules will depend on the sort of contest you’re putting on. However, there’s a good chance the following details will be relevant:

The image below is a Mini-Rules checklist for promotional contest rules in Canada: 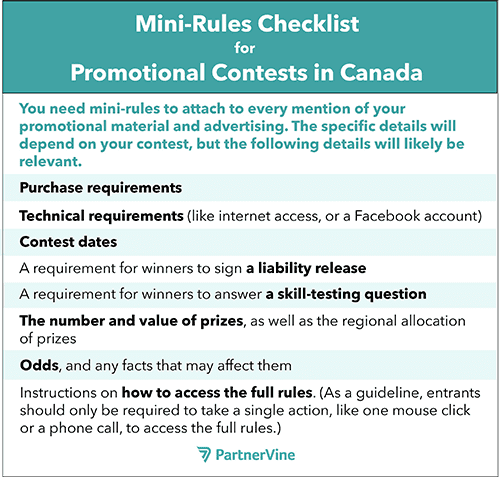 Promotional contest rules in Canada are primarily governed by three pieces of legislation:

A fourth enactment, Canada’s Anti-Spam Legislation (“CASL”), is likely relevant as well if you’re doing any sort of online marketing.

The second and third criteria are generally not problematic, but contest promoters should pay special attention to the first rule.

Section 206 of the Criminal Code makes it an indictable offense to engage in lotteries or games of chance except in very particular circumstances or ways. We won’t set out the full text of the provision here (you can click the link above if you’re interested in seeing the prohibition in full detail), but suffice to say that the Criminal Code renders it necessary to do at least two things when putting on a promotional contest.

1. Introduce an element of skill

You may have wondered why promotional contest rules in Canada frequently require the player to answer a skill-testing question. This question, which is frequently a simple, multi-step mathematical equation, must be answered before a person can win the contest.

Simply put, the Criminal Code prevents most people from putting on purely chance-based contests in exchange for money. Therefore, contest promoters add an element of skill to distinguish the game from a game of pure chance. This avoids the prohibition in the Criminal Code.

The concept of consideration in contract law is one that refers to a quid pro quo. In other words, getting something in exchange for something else. Because a contest promotion is a form of contract under Canadian law, the law of consideration applies.

Section 20 of Chapter 6 of Quebec’s Act Respecting Lotteries, Publicity Contests And Amusement Machines sets out several additional contest rules that promoters must satisfy if they wish to put on a contest in Quebec.

Enforced by the Regie des alcools, des courses et des jeux (Liquor, Racing, and Games Control), these rules apply to contests that do not involve only franchisees (where the contest is put on by the franchisor) or employees of the promoter, a contest and have a prize pool with a value greater than $100. The rules include:

There are several discrete areas in which special giveaway contest rules are required. Here are just a few examples.

Several considerations become relevant when deciding whether to include minors in your contest promotion. People under the age of majority are governed by a patchwork of different laws and regulations that could affect the nature of your contest. These regulations exist with respect to:

Depending on where you are in Canada, what you’re promoting, and the medium in which your contest is taking place, you may wish to obtain specific advice with respect to allowing minors to participate in your contest.

Because alcohol advertising is heavily regulated in Canada, and because that regulation exists at both the federal and provincial levels of government, alcohol-related contest rules are complex.

Federal regulations for alcohol advertising include the Code for Broadcast Advertising of Alcoholic Beverages and are pre-cleared by AdStandards Canada.

All provinces and territories require that all contest entrants must be legally allowed to drink alcohol in the province where the contest takes place. The prize for the contest may not be alcohol.

Canada’s Anti-Spam Legislation, S.C. 2010, c. 23, (the long-form name of which is too long to include here) prohibits several behaviors that could be relevant to contest promoters. While the full impact of CASL on your contest will depend on the manner and form of your marketing, the key takeaway is that CASL prohibits the sending of electronic messages without the permission and consent of the recipient.

This has implications for contests that allow participants to refer other entrants, for example.

The penalties you face for failing to adhere to giveaway and contest rules include imprisonment and fines. So you know, imprisonment is available only for Criminal Code offenses and, even then, would likely only be imposed for serious, repeat infractions. Fines are the more likely sanction.

For individuals who contravene the Competition Act, the Commission may impose administrative monetary penalties of no more than:

For companies who contravene the Competition Act, the Commission may impose administrative monetary penalties of no more than:

Other enactments, like Canada’s Anti-Spam Legislation and the Privacy Act, as well as industry- or product-specific rules and regulations (like those applying to alcohol), contain their own penalty provisions.

For information on Contest Creator, the product from Gowling WLG that generates rules for promotional contests, go to the Contest Creator product page.

For a shorter version of this article providing information on the rules for promotional contests in Canada, see Contests or Sweepstakes in Canada.

To understand how to run your contest in Quebec, see Publicity contests in Quebec. For information on Quebec's language requirements, see our article Quebec's French Requirements.

For a useful overview of the issues, see: Gordon Greenwood. Conducting Contests in Canada, 2018 CanLIIDocs 10902

For information on legislation and regulations in Canada and/or Quebec, see:

Finally, a note on how you can use this article. This article is not to be considered legal advice and is not a substitute for advice from qualified legal counsel. Material aspects of the discussions in this article may change at any time and without further notice. The currency referred to in this article is Canadian dollars.